There is rarely one single reason why retirees decide to move. Rather, they’re motivated by a number of potential benefits – financial and emotional – that you might also find appealing:

1. Lower your cost of living

One reason retirees move is to live somewhere less expensive. That can be as simple as downsizing from a large house to a smaller one in the same area, or moving to a completely different region or state. The idea is to reduce your expenses, so that your retirement income goes a little further. In other words, moving can help you maintain the same quality of life with less money.

If you plan to move in retirement for a lower cost of living, the first thing you’ll need to ask “What’s the cost of living where I am now?” It’s one of three questions this Motley Fool/USA Today article suggests you ask before relocating in retirement.

2. Start fresh with a new adventure 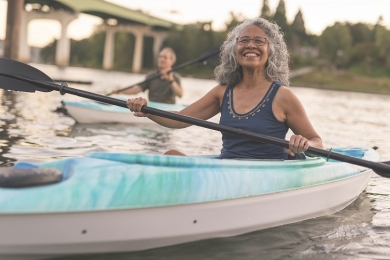 Although retirees often move someplace new to lower their cost of living, it’s not the only reason. Moving after retirement is also a chance to start the next phase of your life in a new home. Giving up comfortable and familiar surroundings can be scary, but if you’re open to a new adventure in a new place, where you’ll meet new people and make new friends, then moving in retirement is a good option.

Along the same lines, retirees move because they have more free time to devote to their interests, and they might find places better suited to those interests. It’s a useful exercise before you move to think about the kind of place you want to live. Resources like the AARP Livability Index can help as you identify potential homes featuring amenities most important to you, including transportation, access to health services, housing affordability, and other factors.

3. Live closer to your children

If living close to family is driving you to move, you’re not alone. About one in four Baby Boomers are planning to move after retirement to be near their grandchildren, according to a study conducted by Meyers Research. These so-called “Baby Chasers” still want to preserve their quality of life, but they also want to spend their retirement enjoying the company of their children and grandchildren.

Before you move, do these three things

Whatever your motivations for moving after retirement, you shouldn’t rush into it lightly. Before packing your bags, here are a few to-do items that will make the move go smoothly:

1. Decide where you want to live

Choosing where to live after retirement is a big decision. It may be where you live for the rest of your life, so it’s worth taking some time to think about where you’ll be happy. It’s no surprise that the majority of retirees are moving to warm-weather places like Florida and Arizona, where they also enjoy low taxes, but those are just two possibilities. If you’re the more adventurous type, you may even consider living abroad.

2. Consider the costs of moving

Make sure you understand exactly how relocation will affect your retirement income. Moving simply to lower your taxes may backfire depending on where you live now and where you move. This article from Kiplinger is a good overview of things to think about from a financial perspective before you move.

Some movers aren’t qualified to handle long-distance moves. If you’re relocating to a new state or region of the country, search for movers who have experience getting their customers’ possessions delivered in a safe and timely manner.

Moving to a new neighborhood? 10 tips to help ease your transition

Moving to a new neighborhood is exciting – yet it can be incredibly stressful. Here are tips to help ease the transition.

Over time, Hollywood has depicted haunted houses in its films. Here’s to hoping your next relocation isn’t into one of these ghostly abodes.

Make the most of your Halloween move

Here are a few fun and lighthearted ways you can keep up your family’s attitude and maintain your excitement during your Halloween move.